Listen to an announcement about a Go Green Weekend event and decide whether the following statements are true (T) or false (F). Your browser does not support the audio element.

Choose the best answer to complete the passage.

Climate change is caused by the (1) ____ high levels of dangerous chemicals in the atmosphere, particularly carbon dioxide. It is estimated that average global temperatures will rise (2) ____ between two and six degrees by the end of this century. We all know the effects could be catastrophic, but are we (3) ____ of the possible solutions?

Crazy as it sounds, a group of academics from British universities is making a plan to build a 12-mile pipe, held up by a huge balloon, that would pump (4) ____ quantities of toxic chemicals, such as Sulphur dioxide, into the atmosphere. Surprisingly, there is good science behind the idea. The chemicals would form a (5) ____ layer around the Earth that would reflect sunlight and so cool the earth, much like the effects of a volcanic eruption.

Read the passage and choose the best answer.

Some people think that if they don't have a yard, they can't keep a garden. Fortunately, that's not true. For people who live in apartment buildings, there is another option: rooftop gardens.

A rooftop garden is just a garden that you keep on your roof. Rooftop gardens are very popular in cities. Most building roots go to waste - people don't use that space for anything. Putting a garden on your roof is a nice way to turn an empty space into something that is pretty and relaxing.

Rooftop gardens are not a new idea. About 2,600 years ago, people in Ancient Mesopotamia planted rooftop gardens. There were similar gardens in Ancient Rome and Ancient Egypt. These gardens had a very important purpose. Many ancient cities had walls. If an enemy army attacked the city, the people hid behind the walls. The enemy army usually tried to destroy the city's food, so the people in the city kept their gardens on top of their walls. That way, they could continue to grow food.

Today's rooftop gardens don't keep us alive, but they still have nice benefits. Plants absorb heat, so if there are a lot of them on a rooftop, they make the whole building cooler. As a result, people in the building use the air conditioning less, which means they use less electricity. One study said that if every roof in Tokyo had a garden, the city would save more than a million dollars a day on electricity.

Rooftop gardening is harder than regular gardening. Here are a few tips. First of all, be safe. Build a fence around your garden. You don't want the wind to blow plants off your roof. Also, remember that rooftop gardens get more sun. If you have a plant that shouldn't get too much sun. Remember to put it in the shade sometimes.

There are many other things that you need to know before you start a rooftop garden. Do some research and then give a try. You'll make your little part of the city much nicer.

Read the passage and choose the best answer.

Big cities like New York and London have a lot of great things. They have museums, parks, shopping centres, and a huge variety of restaurants. However, there are a lot of annoying things in big cities. The most common problems are air pollution and noise.

Traffic is the main cause of air pollution and noise. For example, drivers in New York are famous for honking their horns and shouting. That noise drives many visitors crazy - it even drives a lot of the locals crazy, too. Other big cities have similar problems with their traffic.

Public transportation helps reduce these problems, but it is not enough. Another solution is bicycle sharing. This is a system that provides cheap bicycles. In cities that have bicycle sharing programmes, there are spots that have parked public bikes. People borrow the bikes and use them. They can drop off the bike at the same spot where they borrowed it, or they can drop it off at another spot.

Listen and fill in the blanks. 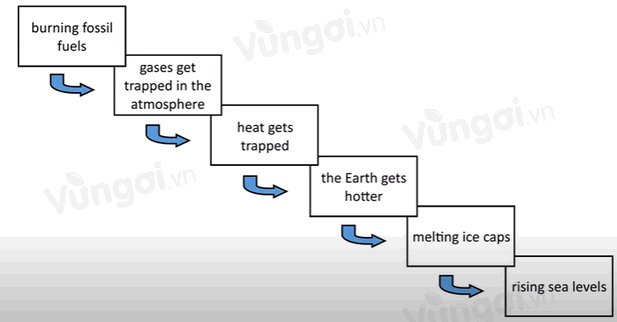 Listen to an announcement about a Go Green Weekend event and decide whether the following statements are true (T) or false (F).

Listen and choose the best answer

Read the passage and choose the best answer to each questions.

In the world today, particularly in the two most industrialized areas, North America and Europe, recycling is big news. People are talking about it, practicing it, and discovering new ways to be sensitive to the environment. Recycling means finding ways to use products a second time. The motto of the recycling movement is "Reduce, Reuse, Recycle".

The first step is to reduce garbage. In stores, a shopper has to buy products in blister packs, boxes and expensive plastic wrappings. A hamburger from a fast food restaurant comes in lots of packaging: usually paper, a box, and a bag. All that packaging is wasted resources. People should try to buy things that are wrapped simply, and to reuse cups and utensils. Another way to reduce waste is to buy high-quality products. When low quality appliances break, many customers throw them away and buy new ones - a loss of more resources and more energy. For example, if a customer buys a high-quality appliance that can be easily repaired, the manufacturer receives an important message. In the same way, if a customer chooses a product with less packaging, that customer sends an important message to the manufacturers. To reduce garbage, the throwaway must stop.

The second step is to reuse. It is better to buy juices and soft drinks in returnable bottles. After customers empty the bottles, they return them to the store. The manufacturers of the drinks collect the bottles, wash them, and then fill them again. The energy that is necessary to make new bottles is saved. In some parts of the world, returning bottles for money is a common practice. In those places, the garbage dumps have relatively little glass and plastic from throwaway bottles.

The third step is being environmentally sensitive is to recycle. Spent motor oil can be cleaned and used again. Aluminum cans are expensive to make. It takes the same amount of energy to make one aluminum can as it does to run a color TV set for three hours. When people collect and recycle aluminum (for new cans), they help save one of the world's precious resources.

Read the following passage and choose the best option for each of blanks.

If you're an environmentalist, plastic is a word you tend to say with a sneer or a snarl. It has become a (1) _______ of our wasteful, throw-away society. But there seems little doubt it is here to stay, and the truth is, of course, that plastic has brought enormous (2) ______, even environmental ones. It’s not really the plastics themselves that are the evil ─ it's the way society chooses to use and (3) _______them.

Almost all the 50 or so different kinds of modern plastic are made from oil, gas or coal ─ non-renewable natural (4) _______. We (5) _______well over three million tones of the stuff in Britain each year and, sooner or later, most of it is thrown away. A high (6) _______of our annual consumption is in the form of packaging, and this (7) _______about seven percent by weight of our domestic refuse. Almost all of it could be recycled, but every little of it is though the plastic recycling (8) _______is growing fast.